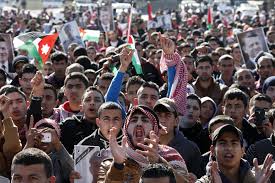 On the 16th of Nov 2015, I published in The Jordan Times an article that has the title “In the absence of favorable living conditions”. This article highlighted the signs of the reoccurrence of the social protests, and this may indicate that the “Hirak” protests movement is expected to reborn. However, recently Jordan is witnessing a kind of upheavals that started in “Theban”, near Madaba, and pulled the trigger for many expected coming movements in other cities, like Tafielh for example.
It is important in this context to analyze these protests from a scientific point of view in order to understand the reasons behind it.  Moreover, it is important to deal with these protests in a wider perspective not limited to the idea of service-demands or looking for job opportunities.  This is right time that decision makers must intervene efficiently, and put an end to the state of denial in which many officials are living in.
Since 2001, problems in Jordan are not being solved resourcefully, but they were postponed. Most of the surface conflicts have turned to be latent ones which means that the problem is always there and it needs just a simple prompt to reappear on the surface, as the conditions which the city of Ma’an witnessed, and which then turned to be almost serious clashes.
No one can ignore the clear signs of failure in the process of development in many Jordanian cities.  Therefore, it would be much better to face these challenges courageously and work in implementing a concrete change instead of living in a bubble of illusion that prevents us as Jordanians from seeing all signs of the present and future risks.
From another side, it would be wrong to keep linking the ongoing protests with the poor life conditions; it is also a matter of political request, a call for social justice, equality and a youth struggle to take their legitimate role in building their future. Dealing with these problems should be built on a complete transformation in the way politics are being run in the country, especially that many notice today there is no change achieved after years of uprising and chaos in the region. In Jordan, same people are dominating the political scene leaving no hope for youth to dream about having an opportunity to participate in building their society.
Today, the level of violence is noticeably increasing, and any chaos might turn easily to bloody clashes. The other risk is that Jordan has already entered the phase of open confrontation with terrorism; therefore, it is very critical to manage any internal crisis wisely. Consequently, raising some questions regarding the challenge that the Jordanian society is facing would be a good point to start either by realizing the upcoming security challenges or stopping against the continuous growth of radical movements.
There is an urgent need to act concretely, with new tools, faces and language that can provide real solutions to the pending problems and counter extremist ideologies and the waves of radicalism that are coming closer to our shores.
Dr. Amer Al Sabaileh
Jordan Times