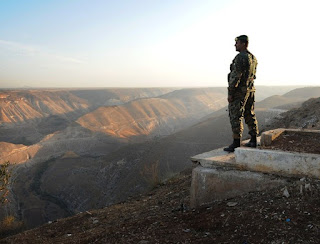 After the terrorist attack on the Jordanian access point for the Syrian refugees “Ruqban”, Jordan has found itself in an open and unstoppable confrontation with terrorist groups. Therefore, it might be logical that any forthcoming confrontation would take a bigger dimension, especially that this act might be the reverberation of the operation through which ISIS from Iraq and Syria will be eliminated. Such risky procedure might push the terrorist groups and their allies to breach new border areas and have a wider space for conflict, and thus secure some new shelters to escape the attacks on its territories.
Many security experts believe that various terrorist groups seek to adopt new strategies based on surprising attacks in different and new places. These kinds of outbreaks are expected to coincide with the intensification of attacks against ISIS in Mosul and Raqa. This ISIS strategy can be used also to distract the international coalition from ISIS preparation to move to plan “B” which includes targeting various new places by directing shocking and terrifying operations.
In return to the Jordanian issue, the direct attack on the Jordanian military access point means that Jordan is now in the range of the direct outbreaks, therefore; Jordan should muddle through such transformation by implementing a radical change in the way Jordan is dealing with the Syrian and Iraqi crisis, on both levels regionally and internationally.
The declaration of this open war would also mean that these attacks might not be limited just on military and security targets; actually it might also target the civic life.
A clear strategic vision and scientific planning should face the near-term phase of confrontation with terrorism. The coming challenges require a very high level of professionalism, and well consideration of the current risks generating from the changes in the terrorists’ mentalities and the nature of terrorist attacks. Such challenges, as well, require a strong high state of commitment and seriousness so Jordan can maintain security: “strong control, attentive follow-up, prompt intervention”. This should go parallel to an enhancing process with the official public discourse that aims to make this public discourse the only credible source of information. Moreover, it is important to focus on building a smart moral mobilization process far from demagoguery that usually gives negative impacts and shows the lack of professionalism and credibility.
In conclusion, the “Ruqban” terrorist attack might be more complex than it appears, specifically, that the terrorists have succeeded in this operation while previously the security services in Jordan have managed to undermine and deal with hundreds of previous attempts without even declaring it.  However, any security mistake should be addressed scientifically, and should push the authorities to work more on preventing any coming attempt by operating hypothetical scenarios to study the terrorists’ new mentalities, behavior and attitude.
Dr. Amer Al Sabaileh