The new phase of fighting terrorism 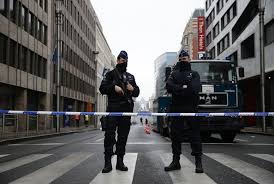 Since the first intervention of the Russian military in Syria, the battle against ISIS has turned to a new breadth. The terrorist group started to broaden its targets map in order to prove its capacity of overruling everywhere; ISIS targeted vital civil posts to create a state of panic, and put more pressure on security services. These new tactics have brought new-fangled challenges to the security services, especially; to those who have been going through a very crucial period; it has become a nonstop alarm for over five years now. The biggest challenge lies in how all neighboring countries of Syria and Iraq will face the continuous crisis in the region, particularly; in a time when all risks are not only restricted to the terrorist threat, but also from the transnational organized crime that has been developing during the crisis.
The recent terrorist escalation shows that the majority of the security services are facing a variety of challenges, to keep up with the rapidly evolving leaps on levels of the crime, the complexity of the new tactics, and approach of the continuous breeding terrorist groups.
Having understood the level of risks that the world is witnessing nowadays should urge decision makers to adopt new strategies. Such strategies should be based on building the capacity of security services to be highly compatible to face professionally both terrorism and organized crimes.
This type of performance should focus also on enhancing the level of professionalism, sense of responsibility and commitment inasmuch as one miniature mistake today will cost a big price indeed. Moreover, these strategies should not exclude an immediate application of a de-radicalization plan by both military and civic sectors. Many studies show that radical signs started to be publicly notices in military sectors in various countires.
While keeping up with professionalism and combating radicalization are the major challenges of many security systems in the Arab region, European security services seem to have a different kind of challenge. European countries are obliged to revise their internal policies and to reform the way they have been dealing with many security and political issues. Most prominently, they need to deal with the current risks using an innovative approach by terminating the “closing eye” policy that made Europe having the enemies from within. This procedure requires more harmony among the institutions on the level of cooperative security. It is ludicrous to realize that some EU countries were paying, monthly, the unemployment fee of 600 euros to people who were fighting in Syria; while in the traditional scene they end up unemployed in the country. For the Belgium case, a walk around the main rail station was more than enough to make any analyst predict the level and the kind of extremism which dominates the scene there. Thus, to be surprised today from reaching this point is not logic.
Facing terrorism results into constructive challenges that get higher and higher; facing it with the traditional security methods seems to make it a lost battle. For example, there is no security service in the world that is capable of checking all people everywhere, or stops the civilian life with all its complicated details. Security measures, in particular, can be applicable just in sensitive areas, but recent developments show that terrorist groups are not interested in reaching these points to achieve their goals. Therefore, using methods of precautions to prevent such risks is more of “Intelligence work” than the police work.
It is central to deal with the new terrorist approach by enhancing the level of cooperative security, and understanding from the mistakes. Simultaneously, security concerns should not postpone the urge to apply a de-radicalization strategy; the real battle lies in the cultural and the social change, the way of life and style of thinking. Such battle can never be won merely by means of weapon or anti-terror operations.
Dr. Amer Al Sabaileh