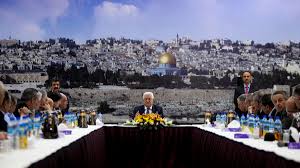 After many years of distractions and other priorities, Palestinian issues are back on the agenda of some Arab countries. There have been recent confirmations from official source that some Arab countries have been meeting with the Palestinian President in order to press the importance of a united Fatah movement.  These reports raise curious questions as to the source and reasons behind the sudden interest from these Arab countries to ensure the unity of Fatah.
During the so-called Arab Spring years, there have been two allied groups competing for influence in order to implement their version of a resolution in Palestine. On one side were Qatar, Hamas and Turkey, while the other saw a coalition of Jordan, Egypt, UAE and Saudi Arabia. The settlement of the Palestinian conflict and its impact on the nature of the Arab peace initiative was the key point of conflict between these two groupings, and it seems that conflict is once again flaring up.
Recently, many observers have reported activity between Jordan, Egypt and Saudi with declared and undeclared visits to coordinate positions between the block and the Palestinian authority. This recent diplomatic activism suggests the issue is reaching a decisive point, with two current matters to address.
The first is the unity of the Fatah movement by ending conflict amongst its members, and the second is to postpone the municipality elections that President Abbas has called for against the wishes of most of his supporters, including those in the Fatah movement.
The delay in these elections is important to the Jordan-Egypt-Saudi block as it is expected that Hamas would have massive wins in the West Bank, which would add to its current power base in Gaza. Meanwhile, a potential Turkey-Israel agreement, which is reportedly being negotiated, could include development and rebuilding of Gaza.
The new Palestinian reality includes Hamas’ strong presence in the West Bank, and after the university elections where Hamas won overwhelmingly, the municipality elections would be the second stage toward the domination of West Bank by Hamas. This also foreshadows the expected positioning from Turkey as an integral player in Palestine pushing out other power brokers in the region, and potentially leading to negative impacts for them from any coming settlement.
The activation of the Quartet on the Middle East and the pressure put on the Palestinian President Abbas can be interpreted as Arab attempts to contain the current Palestinian situation, with increased Turkish influence in Palestine. This is not limited to cooperation with Hamas nor just to Gaza. The West Bank and the custody of holy places is a live issue, especially with the increasingly limited power and influence of Arab countries in Palestine.
As the situation develops, the likelihood of a deeper conflict over the Palestinian issue. Common ground between the two blocks is almost impossible so the conflict can only increase from here and could shift and change along the way.
Dr Amer Al Sabaileh
amersabaileh@yahoo.com

The power of politics