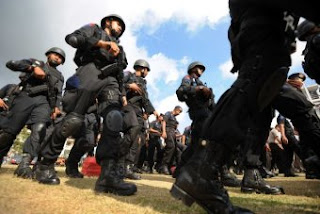 Everyday the new tactics of ISIS prove to work efficiently in achieving two major goals, first to be able to conduct terrorist attacks, second to put more pressure on security system of many countries.
Since the declaration of the Caliphate By ISIS the security challenges took new dimension, it has become an open global confrontation. However, the most important issue about this is the radical change in the style and the way by which the operations are being conducted.
During the long anti terror war, security systems have to deal with high tech sophisticated operations, or to fight organized groups etc. Today’s challenges have completely changed; it is not anymore the sophisticated operation, it transfers to a very simple form like attacking stabbing, shooting etc, which make it very difficult for security systems to deal with it. Moreover, it is not anymore the big centralized group that security systems can infiltrate; it becomes an unknown person, usually without any criminal tracks. Such person doesn’t communicate with any group, so from security point of view it’s a timing bomb that nobody can know when or where it will blow up.
This new development is considered a radical change that managed to put the security system and its personnel under real pressure.  Especially, on which are the plans and strategies that can be immediately adopted to face such new risks.
The multi dimensional challenges should push all security systems to work more on capacity building program for all its personnel, by focusing on enhancing the level of professionalism. Comprehensive understanding of the new style of terrorism and the high level of risks that generate from simple mistakes that security person can do should guarantee the flow of such procedure.
On the other side, the new style of terrorism that target all aspects of civic life can be really harmful for it can leave high number of victims and casualties as if it was a very complex, a well-planned terrorist attack. It is really challenging to prevent attacks like shooting on crowds, or stabbing or even assaults on police, military or security stations or even public places. Therefore, it is important to start thinking about new effective ways to face such danger. Citizens should be involved in facing the new style of terrorism; this requires also a raising awareness process to make ordinary citizens understand the level of risks and act with great sense of responsibility. The state should develop a professional portal to receive comments, observations and remarks from people regarding any suspected issue they might observe. Any piece of information might be critical today to save the country and protect its people from any terrorist attack that might happen. At the same time, the security system needs to work more on enhancing the rule of law in all aspects, closing an eye on some outlaw behavior, due to changing in priorities and the new merging between terrorist and criminal groups, would lead to serious problems. Therefore, the state should make sure to present everywhere and act immediately against any breaking of law, street violation, drugs, weapons, corruption, and bullying, all people should be under the law. By doing this, the state can at least guarantee a positive atmosphere that can   help in facing the challenges coming from the new style of terrorism.
Dr. Amer Al Sabaileh