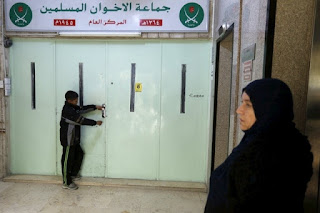 It was not unexpected act by The Jordanian Government to close the offices of the old Brotherhood. The government in Jordan has carried on the following legal procedures to consider the Brotherhood group unlicensed; this means that all its activities are illegitimate. Since the Fall of Brotherhood in Egypt, the aftershocks have also reached the Jordanian branch accordingly. The political failure to cope with the political changes has imposed the crisis within the Brotherhood’s Jordanian branch.
Straightforwardly and subsequent to the arrival of Brotherhood to authority in Egypt, the Jordanian branch had the new map of regional power brought to get the MBs power in Jordan. Therefore, their efforts primarily concentrated on carrying out the map of power through many procedures such as: making use of the fall of Bashar Al Assad in Syria. This was apparent in the MB tactics (which left the Jordanian domestic scene and focused completely on Syria); if Syria made the whole scene of power in favor of the Jordan’s MBs, it would, in fact, be absurd to witness MB praying more than 37 times in front of the Syrian embassy for the cause of “fall of Bashar.”
The fall of Mursi in Egypt, unlike the expectations of the MBs, caused a problem within the Group. Particularly that many youth from within the MB felt that the reason behind the catastrophic fall was the rigid leadership mind. The Jordanian branch was not far from MB’s crisis, however; same persons, language and mentality continued to run the scene. This domination has caused various fragmentations within the group, majorly; what happened with the so-called “Zamzam group”. After this division took place, it was customary to fight for the legitimacy of representation of the MB insideout. The problem within MB is much bigger than the problem with the Jordanian state; actually the problem with the Jordanian government is that of a group who refuses to recognize the need of change within the circle itself.
The Jordanian state has seized politically the status of chaos of the MB, yet it is important to notice that the level of crisis within the group is reflected upon the statements and behavior of its leader.  Some observers express a variety of concerns that the Jordanian step against the MB will legitimize the idea violence, provoked by the group, in Jordan.  The answer to these concerns shows that if such political group is willing to use violence, then the problem is in the doctrine of this group, which turns to be violent too. On the other hand, if this group would really consider violence as an option, they should be simply the target of the core strategy in combating terrorism. Inclusively, all this confirms that narration of many that MB is effectively a terrorist group.
The problem will be in the structure of MB, unless there are serious changes from within, on level of persons, language and way of thinking, otherwise; the current crisis has no way out to resolution.
Dr. Amer Al Sabaileh